St Michael’s is part of the Church of England and within the Diocese of St Albans. Our Parish area covers the civil Parishes of Aspley Heath and (most of) Woburn Sands.

We are people of all ages, praying for and serving the community around us.  Worship is at the centre of all that we do.  We have a traditional service of Holy Communion most Sundays with a variety of music led by our robed choir.  Our Family Service is much less formal, and depending on who is leading there may be all kinds of games and activities as well as music, learning and prayer.

We like to have coffee after the service and stay around and chat, and we get involved in all sorts of local community activities too. 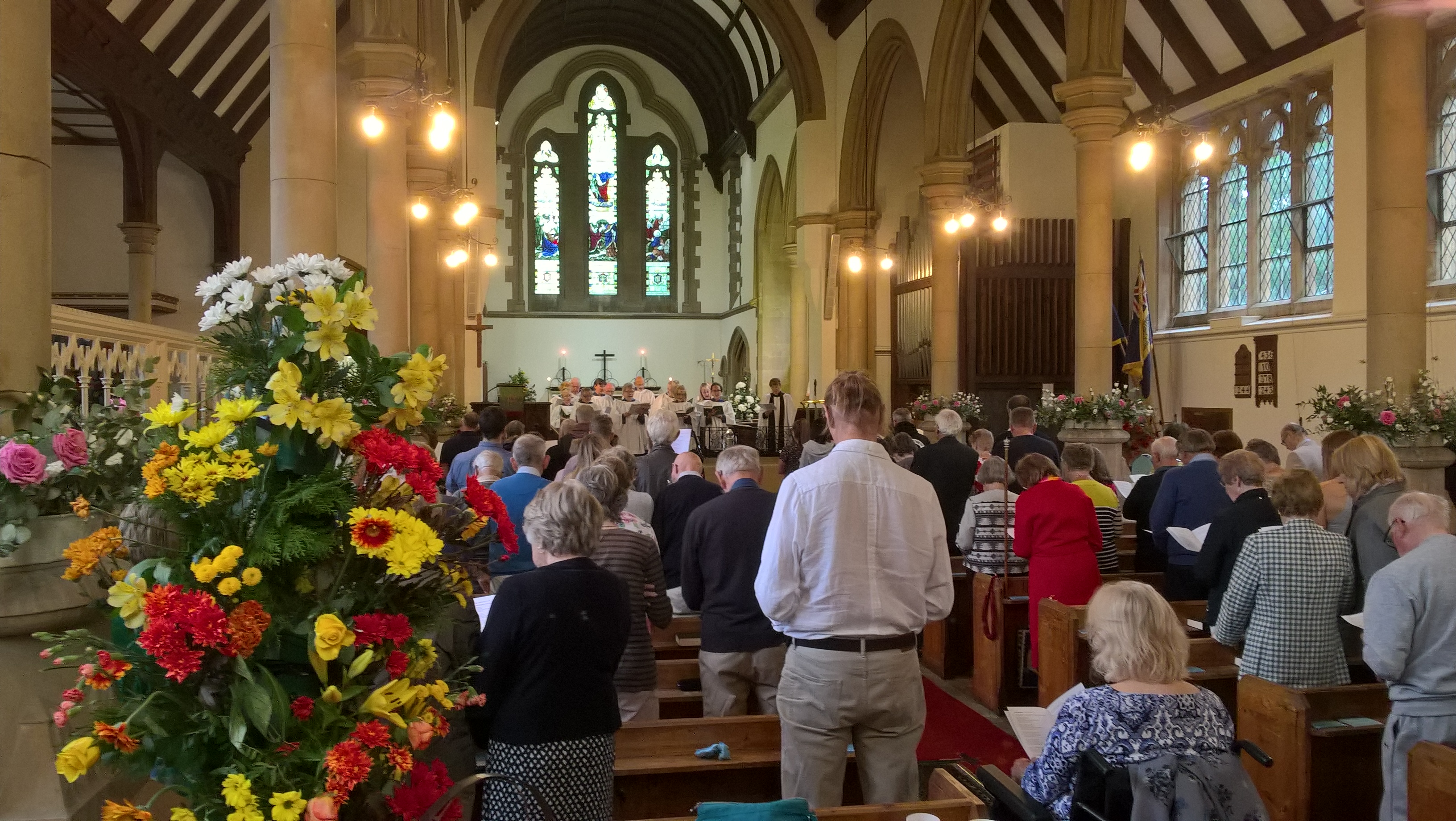 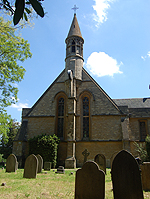 It all began on Thursday 12th October 1865, when a meeting took place at St Botolph’s Church in Aspley Guise. The proposition for the formation of a new District (out of the parishes of Aspley Guise and Wavendon), and for the building of a district church at Woburn Sands was passed. The Bishops of Ely and Oxford, from whose dioceses the new district was to be formed, gave their signed and sealed consent for the creation of the new Ecclesiastical District of Woburn Sands. The scheme was ratified by the Queen herself, at the Court at Windsor on the 4th Day of November 1867.

The Ecclesiastical Parish of Woburn Sands was originally created to serve the outlying districts of Wavendon and Aspley Guise, particularly the “almost lawless race” who lived on the Heath. This new St Michael’s Parish included the present Woburn Sands civil parish, the whole of Aspley Heath with its woodlands, and part of Aspley Guise. The fact that Woburn Sands and Aspley Heath were in different counties has, over the years, caused considerable confusion. 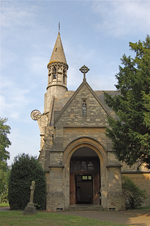 The Duke of Bedford had undertaken to provide the land and finance the building of the church. He would become Patron of the new living. Thanks to a generous donation of £5000 from John Vaux Moore, Rector of Aspley Guise, work was able to start on the building. Building started in 1868, and in less than a year the work was Completed. Compared with the new church at Woburn, which was built in the same year, the church at Woburn Sands was confined within a very tight budget – just £5,000. There was no provision for an organ and had it not been for the generosity of Mr Stevens of Aspley Guise the church would have opened with no organ at all.

The church clock was given by one of the sisters of John Vaux Moore. A writer commented: “The clock is unfortunately in a bad position – but it formed no part of the original plan and is not convenient for sight, although the striking may be heard for miles around”. It cost £100, a considerable sum in 1868. Over the years a great deal more has been spent on its repair and maintenance, but parishioners frequently complain when it goes wrong!

The Consecration Service for St Michael’s took place on Tuesday September 22nd 1868, and the Bishop of Ely, The Right Reverend Edward Harold Browne officiated. The church was consecrated in the morning and the churchyard in the afternoon, and in between the two ceremonies the Vicar, the Rev’d Hay M Erskine, entertained a select party to luncheon in the Vicarage garden

The church was enlarged in 1889, thanks to donations from several parishioners and the Duke of Bedford. One of the most spectacular changes involved in the enlargement was the moving of the original East window, which is now in the Upper Room. The chancel was lengthened by 12 feet, choir stalls were added, and the beautiful stained glass East window was installed in memory of William Henry Denison, the first churchwarden. In 1968 – to celebrate the church’s centenary – two new windows were formed in the south wall of the chancel, and the external brickwork completed with stone cladding.

In 1970 a new vicarage was built in Church Road. The old vicarage was sold, and retirement flats (Shelton Court) were built in the garden. The building was named in memory of Rev’d John Shelton, Vicar of St Michael’s for 33 years. In 1983 the vestry was enlarged, by moving the organ to its present site on the south wall of the nave, and a new room was built above. 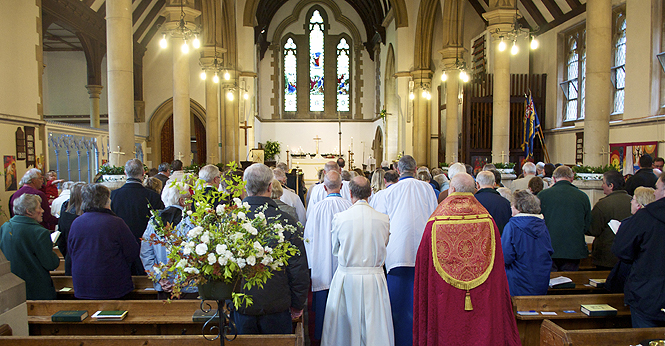 Adapted from ‘ST MICHAEL’S WOBURN SANDS – The Church, the Parish and the People’ by Evelyn Wright

The Friends of St Michael’s have been in existence for over 20 years. The money raised by the Friends is specifically used only, for the repairs, restoration and improvement work at St Michael’s Church. We very much appreciate and thank the regular donations that are made to Friends Charity Fund. We are a registered charity and every £1 donated under gift aid is worth £1.25 to the charity fund.

The Friends are keen to support St Michael’s in making this current delightful church into a greater functioning environment for both the congregation and community.

Graham Youngman is the current chair. 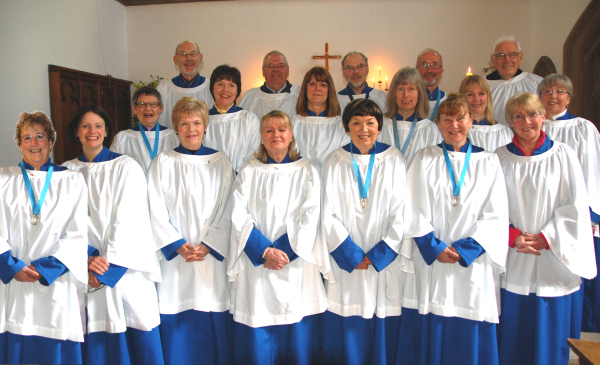 A twenty strong adult robed choir keeps the choral tradition alive and is led by Anne. Rehearsals take place in the church each Wednesday from 7.30 – 8.30pm.

Anne is always interested to hear from anyone with a love of singing to come along for a trial period with us. No formal auditions are undertaken and you can be sure of a warm welcome.

Our church family is growing and consequently there is a wide age range enabling us to offer a variety of music styles, which is exciting. However we remain mainly traditional for most Services.

KayGee play regularly at St. Michael’s. They consist of Keith Price and Geoff Cooper on guitar and vocals.

They have released two CDs, ‘Be Still’ and ‘Echoes’, which are being sold to raise money for the new heating system recently installed in St. Michael’s and to update the existing facilities 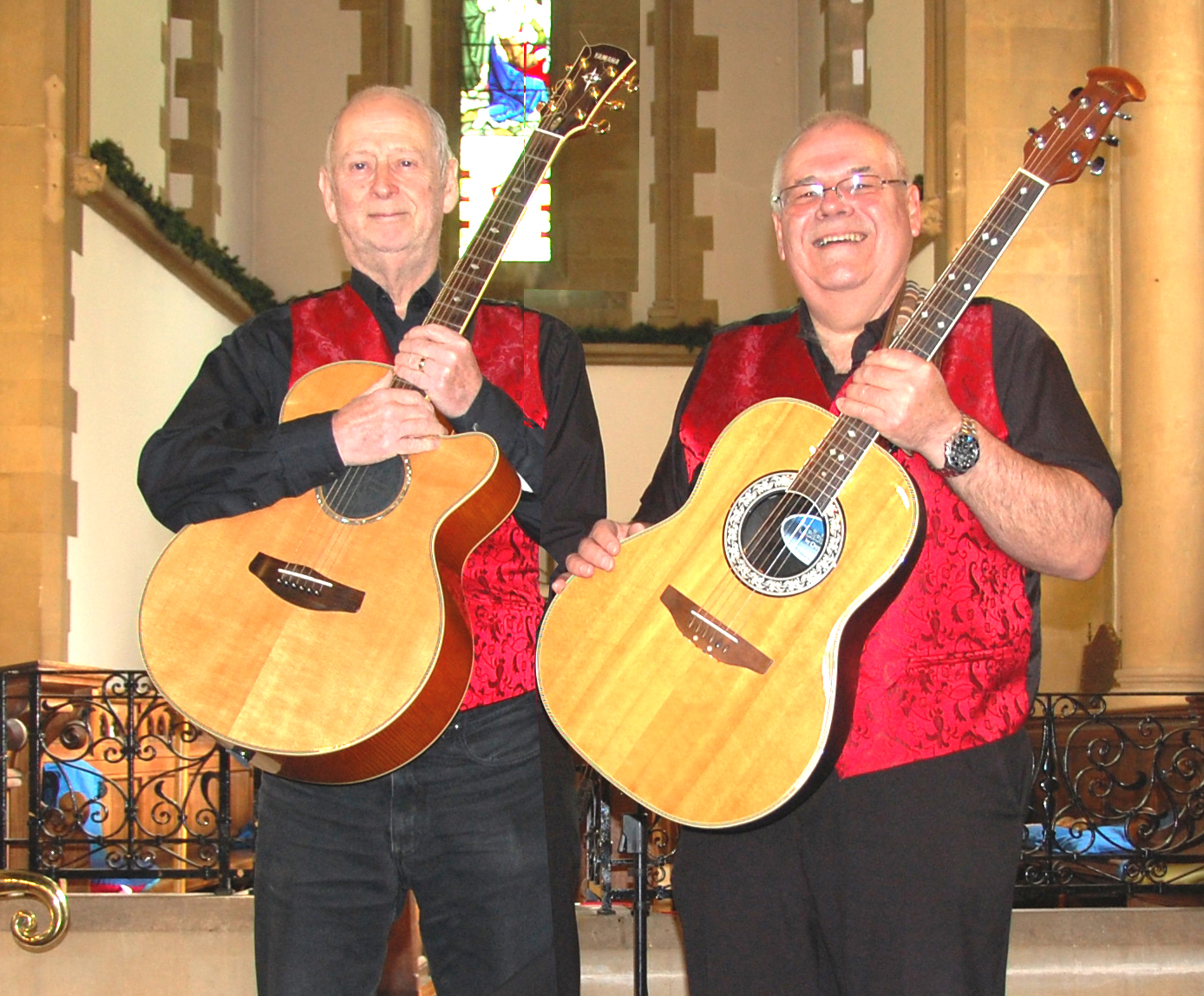 Our churchyard is a special place. Many people come here to visit a loved one’s grave or just to enjoy the peace and quiet of this lovely nature spot. Our aim is to manage the churchyard so that it is a place of peace, dignity and respect for the departed, as well as a haven for wildlife.

Regular working parties are held throughout the year to help maintain the churchyard.

Dates will be published in Upcoming Events when known. Anyone is welcome to join us as there is no need to have any other connection to the church.

Anyone who lives within the Parish of St Michael’s is eligible to be buried in our churchyard. It is not currently possible to reserve a plot, but we intend to ensure there is enough space for future years.

All memorials in the churchyard are governed by the Diocese of St Albans Churchyard Regulations 2020. For information about what is allowed, please see the attachments at the bottom

Churchyards up and down the country have long been not only havens of tranquility, but precious areas of survival for wildflowers, and habitats for wildlife, especially for birds, butterflies and insects. 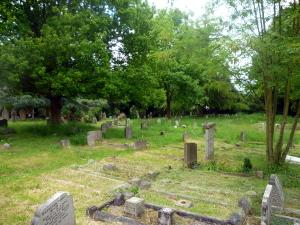 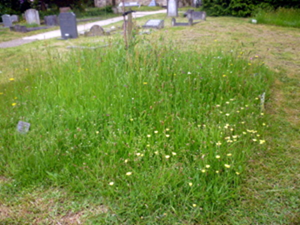 For those setting off for walks on the heath and in the woods you may like to stop off and visit St Michael’s Churchyard, where we are setting aside specific areas to encourage our native flora and fauna. In conjunction with the St Albans Diocese Living Churchyard Scheme and Bedfordshire Wildlife Trust, so far over 60 species of trees, flowers and grasses have been identified. If anyone spots any interesting birds in the churchyard, please let Janet Greenwell know (do we need to say more about who Janet is & how to contact her or will this be a link to her profile?). Later in the year, nesting boxes will be added to further encourage wild birds.

We have attached a copy of the wildlife survey carried out by Janet in 2010, although this does not include the trees. Click here.

So do take time to enjoy the peace of our churchyard on your next walk and see what we are doing to preserve the remnants of our local natural heathland, grasses and flowers.

Here is a presentation detailing the special areas we have set aside and some of the wild flowers we have identified.

We have four graves in the churchyard which are recognised by the Commonwealth War Graves Commission (CWGC).  The official list is given here.

Two of them have headstones in the standard official format, and are next to each other near the hedge to the NW of the church.   Private Joseph Griffin of the Bedfordshire Regiment lived at 2 Hardwick Place.  He volunteered in August 1914 and was drafted to Mesopotamia the next year. He fought in several battles, before being invalided home with severe dysentery and discharged as unfit for duty in September 1916. He then worked on munitions until he died of tuberculosis and heart failure on 1 November 1918, aged 29.  He was buried with full military honours.

Next to Joseph Griffin’s grave is that of Private Frederick Harwood of the Royal Army Medical Corps (198 Field Ambulance), who was held as a Prisoner of War by the Japanese in World War II, from 1942 to 1945.  He came home, but sadly died in 1947 at Bedford County Hospital, as a result of the conditions under which he had been held as a prisoner.  At the time, he was living at 32 Duke Street, Aspley Guise, and his occupation was given as Brickyard worker.

The other two graves recognised by the CWGC are not so obviously recognisable.  Corporal Alec Arthur Peacock of the Military Police, who died when he ran into a car while riding his motor cycle on 30 March 1941, at the Blackmires crossroads, Sutton-in-Ashfield, Nottinghamshire.   He was 22.  He is remembered on one side of a family headstone, near the West wall of the churchyard, by Bishop’s Walk.

East of the church, the grave with the small white pyramids at each corner is for Private Bertie William Wilson.  Private Wilson had served in the Royal Sussex Regiment and in the 39th Battalion, Machine Gun Corps.   He died at home in Aspley Guise on 5 February 1919, of pneumonia, aged 30.  His widow Dorothy died in 1944 and is also buried here.

A number of other servicemen from Woburn Sands and Aspley Heath who sadly died during the world wars and at other times are buried elsewhere, but commemorated on family gravestones here.  A guide to some of these memorials was prepared in 2019 and can be downloaded here. 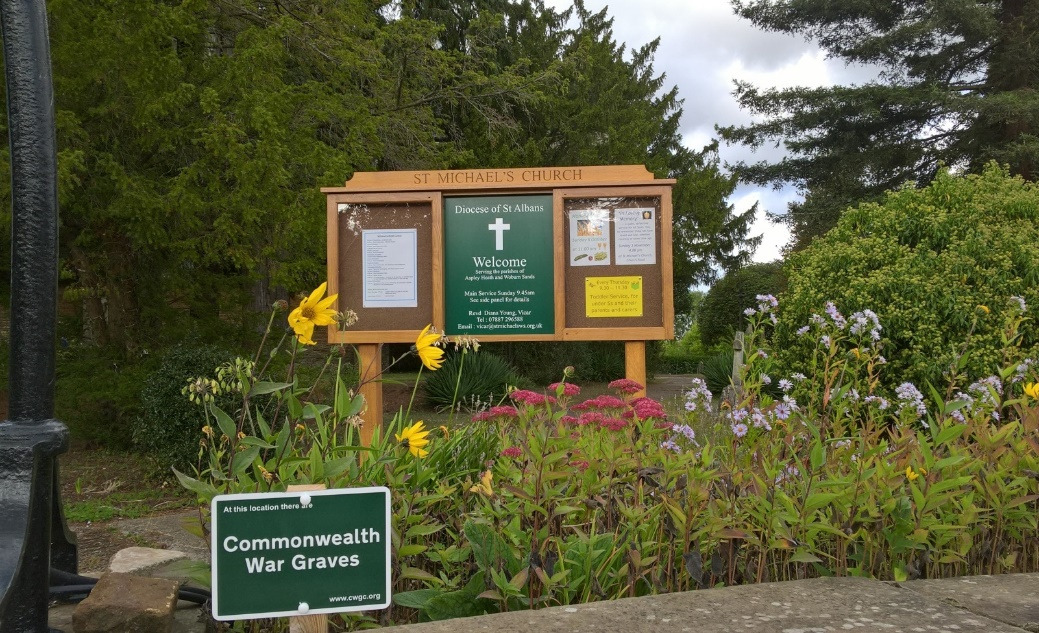 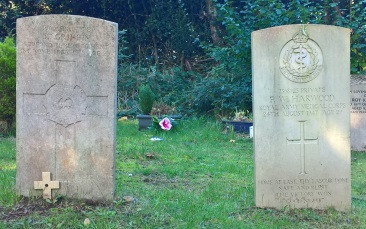 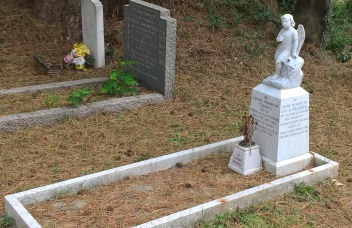 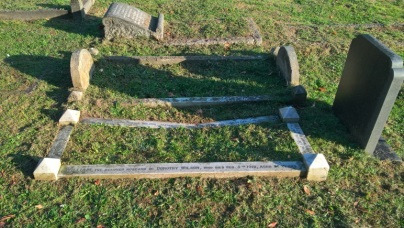 How to Find Us/ Map